The Case of the Homemade Engine Fabricator 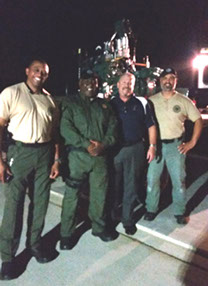 Our firm was contacted by a Texas City Detective who advised that his uncle worked for a company that built engines used in chemical plants to verify the content and amount of product being delivered to the facility.

Our client built the specialized equipment, which sold for $400,000 each, from scratch. The suspect’s activity became known to management when an individual who had knowledge of the scheme had been fired for issues with company credit cards. The individual, who was upset over his firing, decided to tell management about the major theft that was taking place in an attempt to get his job back.

Houston private investigators JJ Gradoni & Keith Kucifer interviewed the informant at great length about his knowledge of the thefts. The informant advised that the suspect had been stealing parts for a long period of time and building engines at his home for resale to competitors.

We were able to verify that a number of the statements made by the informant were accurate. We also learned that the suspect became aware of the company’s suspicions, moving one of the rebuilt machines to a storage unit in Dickinson, TX.

With the assistance of a very diligent and knowledgeable DPS Investigator we were able to recover from the storage unit an engine that was valued at over $400,000.

The suspect was indicted by a Galveston County Grand Jury for First Degree Felony Theft.

RESULT BASED ON INVESTIGATION: The suspect was indicted by a Galveston County Grand Jury for First Degree Felony Theft.

Return to the March 2015 Investigator’s Newsletter

The Case of the Homemade Engine Fabricator